I had been thinking for a little while about trying my hand at making a foie gras torchon from scratch. My mum has made homemade foie gras terrine for as long as I can remember but it wasn’t until I read an article about the only couple of farms in Upstate NY that are ethically breading ducks for foie gras that the possibility of making it myself as well became even conceivable.

Aside from knowing I could actually secure the essential raw product, the perfect occasion presented itself when I found a Sunday lunch date that worked for my friends Tom & Greg (huge meat lovers and definitely not afraid of foie gras – which I totally understand one could be since it is not in everyone’s taste/moral compass), as well as Ben & Ligia (one French Canadian and the other “may as well be French” who are huge fan of the stuff) and Caroline who is an easy-going foodie who is willing to try anything.

I dutifully researched how to make it, and after flirting with the idea of doing it sous-vide (since after all, I seem to cook every protein sous-vide these days!), I stuck with the traditional method. It turns out that the method I followed isn’t so traditional in my mother’s eyes since she cooks her terrine in a low oven for a little while but I was making a torchon which is technically a bit different than a terrine so I religiously stuck to the instructions I found here, which are based on a Thomas Keller recipe and in this iteration, the foie is only briefly immersed in boiling water for 90 seconds before being hung in the fridge for a couple of days.

The process takes several days between cleaning, seasoning, shaping, etc but is otherwise very easy. I started 4 days in advance and it was with some trepidation that I finally unwrapped my torchon on the morning of the lunch, cut into it not knowing how it would turn out …. and literally swooned when I tasted it on a little piece of fresh French baguette. It was rich, buttery, decadent, intensely flavored and perfectly seasoned. Amazing and well worth the effort of doing it yourself, should you feel so inclined.

The foie after deveining and being in a milk bath for 24 hours.

The foie is formed by rolling it tightly after seasoning overnight.

The foie is then immersed in boiling water for 90 seconds, and then transferred to an ice bath, before leaving it to cure and hang in the fridge for a couple of days.

In France, foie gras is traditionally served on toasted brioche (a sweet, soft bread), with some kind of acidic yet slightly sweet relish (like pickled grapes or onions) and paired with a sweet white wine like Sauternes. As previously mentioned, since I am not a huge fan of sweet and savory pairings, I wanted to tone it down a little so I served mine with toasted slices of french baguettes and, after some research, I found this spicy peach relish recipe that I thought would work great and it did. It was amazing in fact (I recommend making it in advance as the taste developed even further after a few days) – my family is not big on spicy food but I have become accustomed to a little heat and it worked beautifully against the richness of the foie and I think it would also pair well with creamy cheeses like Brie or Camembert for examples. 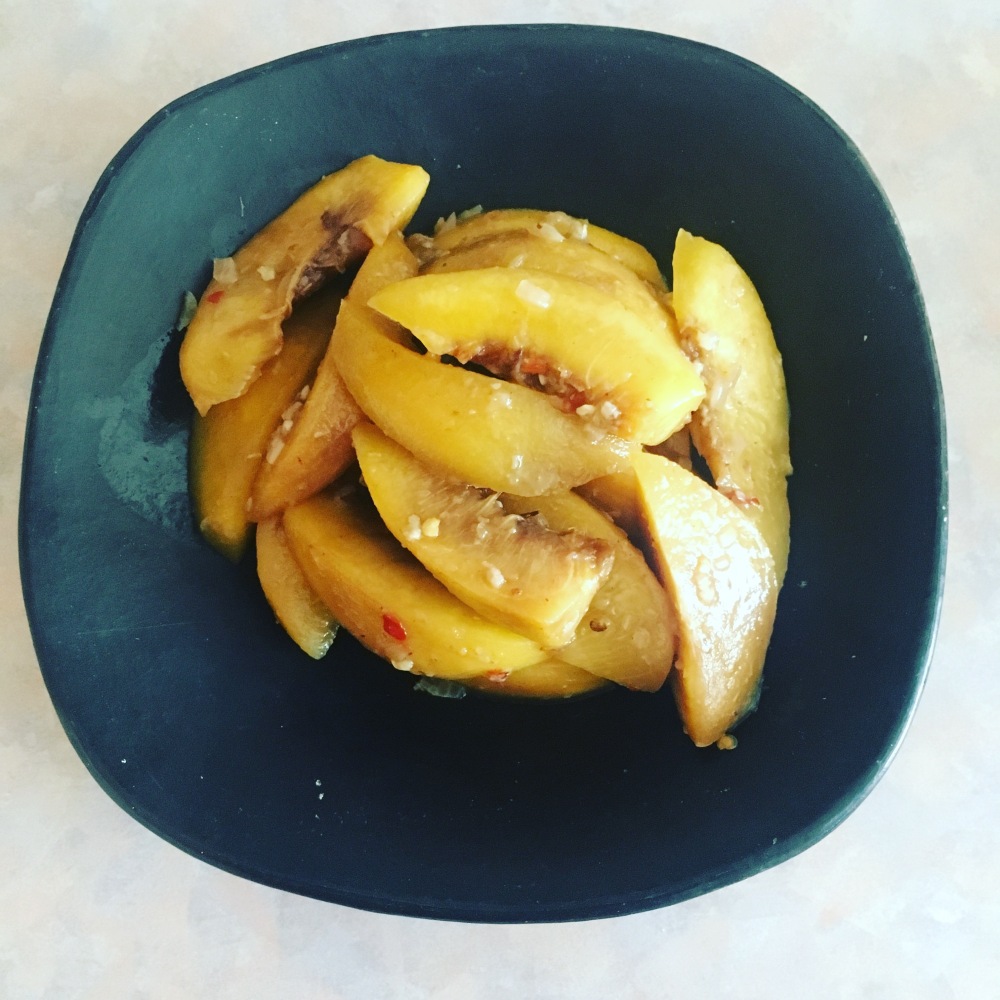 The rest of the meal, in comparison, was less stressful for me but probably one of the best lunches I have made yet in terms of nailing the execution.

I had originally planned on only serving the foie gras as appetizer because, well, it’s very rich. But my friend Fionuala gave me these wonderful eggs that her sister’s chickens produce the week before and I just knew I had to make deviled eggs out of them – and my favorite rendition of this dish is always April Bloomfield’s.

As it so happens, April Bloomfield also opened a cool new butcher shop in my neighborhood (White Gold Butchers) that I had also been dying to try and since that Sunday was Easter, I got a beautiful lamb loin from them which I sous-vided (in pieces) at 131F for 2 hours and then seared on high heat before serving. I made a super savory mint and caper dressing to dab on the lamb because that’s basically the best combination of flavors to pair with lamb, the recipe for which I found here.

I served three side dishes with the lamb. One being just oven roasted baby tomatoes on the  vine – they’re a little sweet, a little smokey and they add much needed color. All I do is toss them in olive oil, salt and pepper and roast them in a hot oven for about 25 minutes. I also made my Mum’s potato gratin because it’s such a crowd pleaser and is one of my favorite dishes of all time – recipe here. And I also served this addictive, savory asparagus and leek side dish with pancetta and lemon. The recipe is here but I steamed the asparagus separately and only added them to the rest of the dish at the end to warm them up. I like my asparagus bright green and with a bite and steaming them and then immersing them in ice-water is the only way I know how to get them like that.